Why do so many applications require permission to read the phone state and identity?

Why do so many applications require permission to read the phone state and identity?. Specifically:

For example Quickpedia is a Wikipedia portal, but wants access to the phone. What is the explanation for this?

It allows the App to read a unique ID (a phone identifier named IMEI) that's associated with your phone.

It can therefore help with copy-protection or the attempt to track the number of users.

There is another reason for this than the unique ID. I would guess that half of the apps don't access those values at all. The problem is that for a lower version up to Android 1.5 this permission does not exist. Everybody could access these values without requesting something.

Therefore if you create an app that is compatible with 1.5 this permission will automatically be added to emulate the lower security of Android 1.5 because of that you could ignore this permission in most of the times because it tends to be just a compatibility issue. 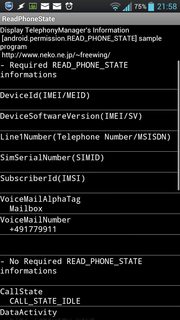 This question has been bothering me quite some time. So now, finally, I decided to get to the bottom of the issue.

The Playstore has an app named permission.READ_PHONE_STATE, which requests READ_PHONE_STATE as the only permission, and does nothing else than printing out all data it can access with or without using it. I've installed that on my LG Optimus 4X, being rooted on stock Android 4.0.3, and revoked the permission using LBE. Results where pretty interesting, as the following screenshots show: 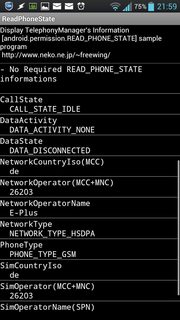 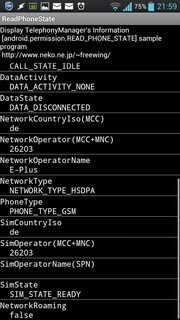 As you can easily see, even some information the dev though inaccessible without the permission, was freely accessible: my mailbox number (remark: Yes, it's the correct one; with my provider that's the shortcut when dialing from your own device, so I can freely display it ;) At the end of the first screenshot you see:

It's even possible to see whether mobile data are active (DATA_DISCONNECTED; I was on WiFi when taking the screenshots, as you can see in the notification bar), which country you're in, your provider (including some technical data on him), whether you're having a SIM card, or if you're in roaming.

The only things not accessible hence are identifying data: IMEI, SIMID, IMSI, and your own phone number.

Conclusion: This permission is only needed for identification purposes, nothing else.

Why do so many apps need it then?

Likelihoods in exactly this order, IMHO.

Google Play policy now forbids apps from getting your IMEI to identify you for advertising purposes. All the ad libraries have been updated now to use the Google-Play-Services-provided "advertising ID", so any that still use the IMEI for this purpose should be reported to Google.

As it's hard for the user to tell what the app is using the IMEI for, you should ask the developer to explain first.

2 Another developer just pointed me to a subtle difference: while the permission is not needed to read the current call status (as I've pointed out), it might be needed to register a listener in order to be notified on changes of the call status (see: Detecting incoming and outgoing phone calls on Android). While there seem to be means of handling this automatically when the system calls onPause, that might not always be suitable: think of your alarm clock. You might not want to have that automatically stopped on an incoming call xe2x80x93 especially not when your profile is set to ringer volume "muted".

3 Again a correction from Dan: You only get the default extra permission if your app's "target" version is 1.5. If you target a later version but your min version is 1.5, you don't get the permission added automatically.

So in summary, the application may not actually be accessing your "phone state and identity" but if the developer specified that his/her application can run on devices with 1.5 or less then that permission will be shown.

Many ad publishers use this permission to get the Phone ID for all sorts of tracking purposes. There are other ways to get a unique ID, but unfortunately they are buggy in older Android versions (the story is more complicated, see e.g. https://stackoverflow.com/questions/2785485/is-there-a-unique-android-device-id or http://android-developers.blogspot.com/2011/03/identifying-app-installations.html for a more complete story).

So if the app uses advertisements, there is a fair chance that the app itself does not actually need the READ_PHONE_STATE permission, only the ad provider does.