How can I ignore the AT&T software update?

I keep getting this message every 10 minutes or so on my Samsung Galaxy S3 (non-rooted Android 4.1.2): 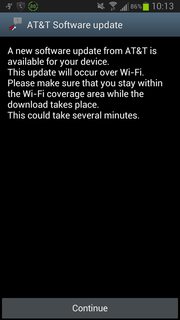 How can I ignore it?

I want to skip this update as the penultimate one introduced some nasty bugs. 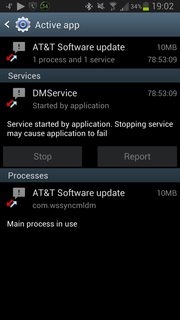 Also, I restarted the device and the AT&T service is launched at startup. 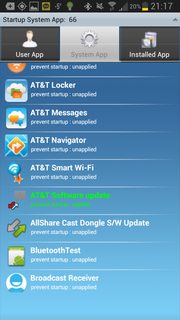 I called AT&T, and this is a mandatory update. Other than rooting, there's no way to avoid the message. You can avoid the download by not going onto WiFi. If you install the update, you need to re-enter WiFi passwords EVERY time you reconnect to a WiFi network. Horrible! I'm avoiding this thing even if have to keep hitting the home key when the message pops up.

So, I know this is old, but for the record...I found a way to block all updates without root. I downloaded a tool called debloater (google it) and blocked: wssyncmldm.apk wssyncmlnps.apk LocalFOTA.apk

Now it stopped trying to download the update that would always make my back soft key not work. Done and done, and no root required.

I just wrestled with this on my galaxy note 9.0. In /system/app there is a file called (for me) FWUpgrade.apk Even though I am rooted it refused to rename or remove it in a file explorer... I tried a few. I eventually just used terminal to chmod 666 it after su-ing to get root. Then I removed it no prob. So, at the term prompt:

Theres a FWUpgrade.odex too, so I rm'd it too. dont know if it worked cause of the chmod or because I was root and I could figure out how to give su permissions to the file explorers I tried. One told me no, the other told me it it worked, but it lied. Hope this helps!

I have been using a Note 3 on AT&T for about four months now and I have so far managed to avoid unwanted firmware updates without rooting. I am still running Android 4.3.

I don't want kitkat. It doesn't remember wifi passwords. I have also heard of issues with bluetooth functionality and sd card access limitations. Also, battery life seems to be negatively impacted by these updates. I have dodged the updates two different ways.

One way is by going into the application manager in your settings when you see that annoying update message come up. Select "running" apps in the app manager and you will find "att software update." You can't delete it but you can turn it off or force it to stop. That is a temporary fix. Eventually that message will come back again if you do this.

If you want to block the update for a long time as in maybe a 90% chance of never dealing with it again, there is an app called Ad Blocker. The developer is Smartdog Studio. It disables wifi from being used by whatever apps you want. It's purpose is to block ads from apps that use wifi even though they don't require it to run. If you apply ad block to an app that beeds wifi to run, the app simply will not run at all. But when you go to other apps that you want to use wifi with, your wifi will work with those. This app effectively blocks the software update.

It can be glitchy though. Can turn wifi on and off when you have multiple apps that are capable of completing the same task. Like web browsers for example. If I click on something that is trying to take me to a website, and I have multiple web browsers on my phone, there is a screen that pops up basically prompting me to pick a browser. With ad block on the Note 3, that screen that comes up often turns wifi off. Set defaults to avoid that. And if you have over 300 apps on your phone, and you try to go into ad blocker, it will most likely time out and crash. So if you want it to work well I wouldn't install anymore than about 275 apps on the phone. Otherwise it should be fine.

I use nova launcher. Hold finger on screen choose short cuts, activity, scroll down to att update tap on left side. Uou will see the app below it. Click on it it will send it to desktop. When you click on it you can edit The dm connection settings. Click on profile then change to mformation(thats not a typo) Then click on the name choose edit. Then delete all fields except the profile name then save. Try running software update from settings, about device. My device will no longer connect to the dm server. Im saying good by to lollypop! I have screen shots.

I haven't tried this, but in your APN settings there's a setting called "fota," which stands for "firmware over the air." Removing that APN type and rebooting your device could stop those updates.

After my Galaxy Note 3 got all messed up by Lollipop update, I rooted by phone and installed DisableService app from Play Store.

FYI this can be helpful for android owners. I did switch from att to tmobile service after 2 years plan for my galaxys4.The problem I could not get any 4g signal. I was ready to switch back to att free galaxy s5 2 years plan. But I read that the band shift of tmobile and att are different so I found on internet a way to update the ATT shift band to be compatible to Tmobile. For that I need KitKat firmware and I am under lolipop 5.01. I know there is a lot of problems with lolipop(even when I was with att lolipop was terrible, draining battery phone cell signal very weak etc...). So I found away to down grade to kitkat and guess what my 4g is fully functional. it was a firmware problem. So i confirm lolipop is the worst update ever. (lost of 4g, draining battery....) so I am good now with Tmobile. The next step was to root my phone to avoid he update to lolipop.I did use disableservice to kill the ATT update.I Hope this will help for you future next move.